Undoubtedly the most popular game mode, Zombie Mode is basically an unending war between humans and the undead. During the beginning of a round, all players are given 20 seconds to choose their loadout and find a secure area to group up with other humans. Once the countdown reaches 0, a few random humans transform into zombies.

Zombies generally have higher health points to compensate their melee-only attacks, and also jump higher. A human hit by a zombie immediately transforms into one. Zombies win once they have infected all humans, while humans win if they successfully kill all zombies or survive until the timer runs out.

To-date, there are 5 Zombie Modes, with 4 revisions:

The vanilla zombie mode with no modifications to its core mechanics.

Humans must survive the round by killing all zombies or running down the time. Zombies win by infecting all humans.

However, zombies killed do not respawn until the next round.

The first revision to the Zombie Mode. Humans are now able to survive longer with supply boxes. During every round, they are randomly dropped around the map. By interacting with one (default [E] key), a player is able to access the Buy Menu. Meanwhile the zombies have come in several types, with each one possessing different abilities and strengths. In addition, each one has a zombie grenade which emits a huge shock wave to disorient humans.

By infecting 4 or 5 humans without dying, zombies immediately undergo evolution which increases their health points and also unlocks their abilities. They also regenerate their health points while standing still without taking damage in the process.

The second revision to the Zombie Mode. With zombies mutating themselves even further, the humans are in need of extra firepower.

This time, a few humans are either chosen as Heroes or Heroines (depending on the character gender) or sidekicks.

Heroes/ Heroines have access to much stronger weapons and have higher health and armor points. Sidekicks, as a less-powerful version of the Heroes/ Heroines meanwhile access a different set of anti-zombie arsenals. Each human now has two new abilities, each one usable once per round. The Sprint (default [5] key) ability grants a human supernatural speed for 10 seconds, while the Deadly Shot (default [6] key) ability allows any weapon to deal fatal damage to zombies for 5 seconds.

A new feature, the team-wide Morale Bar is introduced. Starting at 100% firepower level, it increases all human’s weapon damage by 10% for every zombie kill, up to 230%. Being near other humans adds an additional 5% (per person) to those within the vicinity. For example, if you are with 3 other survivors, that equals 15% additional firepower for all 4 of you.

With the mutation rapidly coursing through their veins, the zombie lineup has expanded with some new species added, including their own Hero and Heroine. Now all zombies are able to use their skills even before evolving.

Just like the humans, each zombie has its own Rage Bar which increases by taking damage from humans. By filling it completely, one will undergo evolution.

This time, zombies killed will continue respawning until they are killed from a HEADSHOT. As part of the game balance however, they are protected from headshots for 45 seconds right after the infection begins.

As a standalone mode and the third revision to the series, Darkness brings several major overhauls as part of the reboot. While the main objectives remain the same, both humans and zombies undergo changes in their abilities.

With the new day-night cycle, humans are much stronger during the daytime, while zombies become more powerful during the nighttime.

Being the fourth revision to the series, Rise or alternatively, Zombie Evolution introduces new elements while re-balancing the game mechanics. The second standalone and fourth revision to the series, Zombie Z (Zeta) remains aligned with Zombie 3: Heroes rather than Zombie 4: Darkness. The most obvious difference is the addition of mutations available to both zombies and humans. Leveling up unlocks zombie and weapon classes, while mutation unlocks enhanced abilities (e.g. sixth sense, double jump). The Morale Bar is replaced by a Virus Mutation Bar. 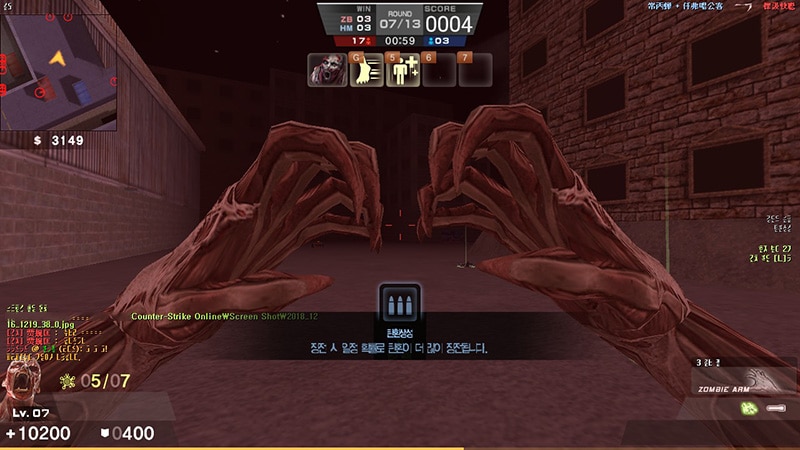 By taking damage as a zombie, shooting at zombies as a human, the Virus Mutation Bar fills up. Once its fully filled, a virus DNA is unlocked for mutation and the player gains one level. 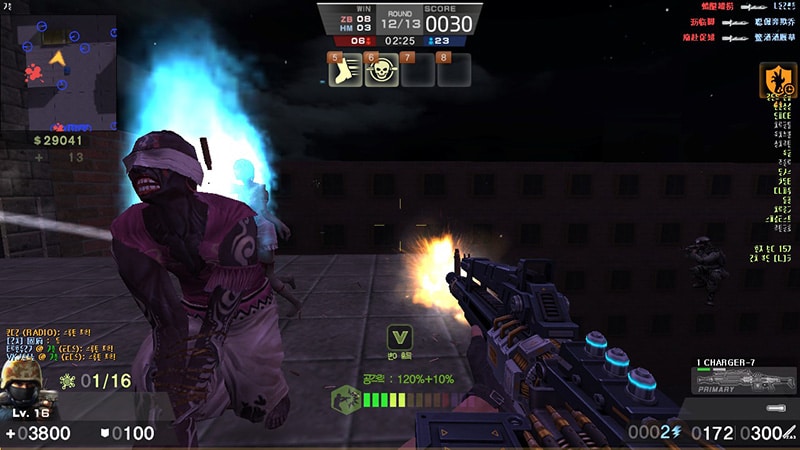 Based on the popular community mod, this version remains more or less unchanged. Humans have to escape the zombies by breaking through barriers and checkpoints before finally reaching the escape point. Zombies meanwhile have to infect all humans or reach the escape point before the humans to win. With multiple routes available, supply boxes for humans are available with the following power-ups; grenade set (HE, Flashbang, Smoke grenade), ammunition resupply, and vital detector to detect the zombies’ distance from the user.

Being a co-op survival mode, the objective is to survive with other players while defending the main shelter from zombies. During the daytime, survivors gather resources such as materials and food scattered around the city while avoiding wandering zombies from attacking them. Zombies are generally weaker at this point.

The resources are used to build defenses such as sentry guns, unlock building upgrades for expansion and ultimately upgrade the shelter’s defense. There’s a dedicated storage area for sharing resources.

There are three mastery skills a player can choose from, namely Combat (attacking), Survival (scavenging/ harvesting) and Engineer (defense) which could be upgraded. When night falls, survivors are required to defend their post. Zombies become much more aggressive and powerful, especially when the days go by. At some point, zombie bosses will make their appearances.

Once the final boss has been defeated, the game ends.

Zombie Shelter also comes in Team Match version, which two teams of 3 survivors fight one another.

Alternatively dubbed Zombie Battle or Zombie War, several changes to the zombie mode mechanics are introduced. During the beginning of the round, zombies placed around the map at random are not allowed to move or see until 20 seconds have passed.

Humans die the moment they are attacked by a zombie. Zombies meanwhile continue to respawn until killed by a headshot (Deadly Shot ability available to all humans).

Meanwhile zombies can restrict up to 5 specific primary weapons on the human team, with the human team choosing their own as a counter-measure.

30 seconds before each round ends, zombies are allowed to view humans through the walls.

Teams are switched from time to time.

A battle between Zombie bosses and the humans. After the 10 seconds countdown, at least one random player is selected to be a Zombie boss.

With 4 choices to choose from, a Zombie boss has a huge amount of health points and their unique skills to use against humans. An Evolution Bar displays the progress to undergo evolution from killing enemies. Once that happens, the Zombie boss becomes much stronger, and unlocks the final ultimate skill.

After a Zombie boss dies, the player respawns back as a human and the random selection process repeats again.

On the humans side, players get to choose their weapons to fight the boss(es). Each player is provided with a Damage Gauge which fills when dealing damage. Once full, the player has the opportunity to commandeer a giant robot or an attack helicopter.

The player who reaches the target score or scores the most points once the timer runs out wins the game.

All Stars is basically Team Deathmatch, except with different characters added in addition to humans. With a total of 19 characters ranging from zombies to chickens, each character has its own unique abilities and/ or weapons.

For game balance reasons, players are assigned characters at random before respawning. Players are split into Counter-Terrorists (BLUE) and terrorists (RED) teams. The first team that reaches the maximum kill score wins.

A team of Hunters set out to kill the Joker (Hidden) on the run. As a Hidden, he runs much faster, kills with just one strike and is fully invisible unless a flashlight is shined on him. Once the time is up, another player is randomly chosen to take his place.

To further disorient the humans, traitors are also randomly selected to side with the Joker. Traitors generally have similar abilities to the Joker, except they are not invisible. While their primary and secondary weapons do no damage, they are only able to kill with their knives, particularly in the form of backstabs.

Popularly known as Prop Hunt, a team of players are chosen as props and have to hide from the hunters. Everyone on the props team are able to choose between two/ three random choices (vary greatly in size) and optionally, draw a new selection of props. Props must blend themselves into the background and/ or escape the hunters to survive the round. Players spectating on the props team are able to thumbs up surviving ones by pressing on the “T” key. Each spectator can only vote once per round. Every “living” survivor has a maximum of 10 thumbs up. Once per round, objects change their forms during the 20-second countdown before the second minute. Meanwhile to prevent weapon spamming, humans lose health points each time they attack a non-player prop. Only when 40 seconds remain before a round ends, the hunters are given Burning Time. During this moment, their health do not decrease when shooting.